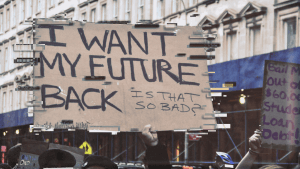 Power to the people. Power to the people. Power to the people. The refrain that echoed through the protests of the 60s and 70s. At the time, it united young people in their fight against the unfair reign of the ruling class. Needless to say: things have changed a lot over the last 50 years, and nowadays activism looks very different — but that same rallying cry still rings true. But now—in the modern day—that same rallying cry has taken on a different meaning to that of the demonstrators and protestors that gathered on the lawn of Lafayette Park throughout history.

The age of the internet has ushered in a new, more radical form of people power. If you've got a phone in your pocket, you have the powerful ability to record, create, and disseminate information — a power that was previously placed in the hands of only a select few. Now, anyone can be an activist.

Activism is a core part of any community — it's required to resist corrupt powers, voice the needs of the people, and strive to create a world that is comfortable and prosperous for everyone — but it's a really tough gig. Trying to make sure the most powerful people are being transparent and accountable...also puts you in direct conflict with those super-powerful people. Unfortunately, it's inevitable that those in power will still go to great lengths to try and dampen the influence of activists working against them and their interests.

In the 60s and 70s, this often meant targeting leaders directly. Starting with the FBI's notorious COINTELPRO project, it's well documented that the bureau obsessively tracked political activists during the J. Edgar Hoover era. There is considerable documentation detailing the advanced and extensive surveillance operations which targeted leaders like Martin Luther King and Malcolm X. These activities were part of a larger strategy for the FBI to discredit, disrupt, and destroy various American political organisations.

When it comes to major movements, leaders aren't just people, they're heroic symbols — and any blow to them is felt tenfold by their respective movements. Law enforcement agencies have used various forms of subterfuge over the years, ranging from simple tracking to sophisticated espionage. There are even relatively recent reports of undercover police going so far as to have children with legitimate activists in an attempt to build credibility for their operations.

This time around, the fight looks a little different. More recently, social movements have strayed away from placing too much power, trust, or importance in a single (symbolic) leader. Taking the power to the people slogan more literally, movements are instead adopting deliberately decentralised structures which are more community-driven — spreading all the power to all the people. Over the last decade alone, we’ve seen major activism movements like the Arab Spring, Occupy Wall Street, and the Extinction Rebellion take on decentralised structures.

In tossing away centralised leadership in favour of the collective, movements are much less prone to leader-targeted sabotage — although there are some trade-offs; the decentralised model can make things like organising and prioritising more difficult.

It's important to note that the idea for modern movements isn't to be leaderless — it's to be 'leader-full'. That means everyone can be a leader, they can take the initiative to organise actions, to rally people together, to decide what the most important issues are for their local communities. The beauty of decentralisation is that it gives people the ability to pursue local action which also serves a wider cause.

And the internet? Well the internet has taken this model and put it into turbo-mode. The idea of a local community is a lot different post-internet — after all, the entire purpose of social media and web 2.0 is to create meaningful, virtual communities. A lot of the time these virtual communities act as stand-ins for their physical alternatives, but these communities can never really be 1:1 mappings of the 'real' communities that exist in the physical world — they're digital, which fundamentally alters the way our social groups form, behave, and interact. Nonetheless, social media has decreased the barrier to entry for political participation and amplified movements, stakeholders, and political actions which couldn't gain traction in the past due to lack of access to or visibility in traditional media.

The internet has already proven itself to be the greatest information-spreader in human history, and that combined with a social media architecture designed around digitising social groups and communities, people have an all-time-high capacity to organise into groups with common political and social goals. However, whether social media actually provides a means to achieve those goals is still up for debate. The concern is that the kinds of activism that digital social networks enable is ultimately passive, and that—despite increased levels of awareness—real, change-instigating, on-the-ground action isn't actually increasing or improving. However, while social media itself has notable flaws — technology itself can be the means of action — just like picketing, marching, and sitting-in.

In the early 90s, as tech was starting to really tighten its grip on people's day-to-day lives, there was a group of people who imagined a new kind of action which would be centred around technology, code, and cryptography.

The cypherpunks had a relatively vague political goal in mind — freedom. They were advocating not only for their own freedom, but for a free and open world. As a group of thinkers, programmers, and researchers, the best action they could take to progress that political goal was clear: code.

Cypherpunks write code. We know that someone has to write software to defend privacy, and since we can't get privacy unless we all do, we're going to write it. We publish our code so that our fellow Cypherpunks may practice and play with it. Our code is free for all to use, worldwide. We don't much care if you don't approve of the software we write. We know that software can't be destroyed and that a widely dispersed system can't be shut down.

Although it might have been a relatively fringe movement at the time, the idea that the cypherpunks had was important: the idea that technology as code, infrastructure, protocols, standards, and education, could be used to protect people's rights. The focus was to build not only a community but technologies which would stand up and defend people's rights forevermore. To them, technology was not just a conduit or a tool, but a meaningful protection that could protect people — just the same as words written in a constitution or a lock on your front door.

While the internet's prowess as an info-spreader is proven, the jury is still out on whether the internet can deliver on its promise of being a great equaliser. In the past, activists have relied on institutional protections —things like constitutions, judicial systems, and universally recognised rights—to do their work without risking their peace and safety. While these protections are obviously important, they can’t always be guaranteed — and over the last few years we’ve seen authoritarian governments willing to commit human rights violations to quell waves of activism. But that’s why technology is so special. We’ve already started to witness how code, protocols, and infrastructure could become a new pillar in the realm of rights protection — but we need to keep going.

We can make a great leap forward by uniting the reasoning behind the decentralised modern movements born on social media and the thinking of the cypherpunks. The logic behind decentralised movements makes a lot of sense, it makes them more resilient, enduring, and democratic — and that logic should be reflected in the technology which supports those movements.

While social media might make it possible for activists to decentralise their own organisations, there’s still a huge problem if movements are relying on centralised social media platforms (Twitter, for example).  This leaves the movements with an easily targetable weakness— the centralised governance and infrastructure of the social media platforms themselves. This exact situation played out in 2021 when Nigeria’s government banned Twitter for seven months, claiming it was a necessary measure to protect the country from anti-government political activity. In reality, the ban stifled activists and limited Nigerians’ ability to freely communicate and organise.

Bans and shutdowns like this are only becoming more common, and it's clear that not only do we need to create social structures that are decentralised, but we also need technical infrastructure which is decentralised.

Technological design is going to continue playing a bigger and bigger role in future civil rights movements. Technology is already an essential part of the way modern activists operate, and without rigid technological protocols and infrastructure, our rights in the modern world just can't be guaranteed. That's exactly why technology like Session is so important. It's the shield which will protect the innocent and the passionate and the sword which will poke a hole in the powers of the corrupt.