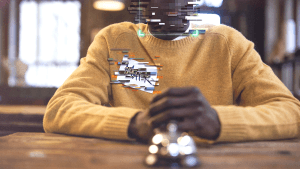 The Session blog has a habit of getting a bit doom-and-gloom sometimes, I often talk about the panopticon of digital surveillance and how we're just a few short steps away from killer AI robots — but this time I want to focus on something a bit nicer. It's the miracle of love. Well, kinda. I've written about anonymity over and over, and goddamnit I'm doing it again — except this time it's about dating and anonymity.

Anonymity and dating might not seem like a match made in heaven, you're probably gonna want to know who you're dating, after all. But in the end it all comes down to safety. At the core of it, dating is high-stakes, intimate, and emotional — and because of the vulnerability that comes with the territory, safety is really important.

Yes, the world would be a whole lot simpler if we could all just...get along. Unfortunately, the reality is we can't trust all 7 billion of us to do the right thing. All too many of us have had to deal with someone who just won't go away when they're told to.

This is a societal issue, and—to be clear—it absolutely can't be solved by technology, but we should at the very least put protections in place to prevent technology from exacerbating these issues. The modern web often enables harassment that wouldn't have been possible ten, twenty, or thirty years ago.

A study completed by Pew Research Center found that 37% of people who used dating apps had experienced someone continuing to contact them despite them saying they weren't interested.

It's important to note that women are by far more likely to have negative interactions on dating apps — especially young women, and the differences are particularly stark when comparing serious harassment like threats of physical harm.

Another piece of research from Pew showed that women, especially young women, were much more likely to encounter sexual harassment anywhere online — not just dating apps.

That's where anonymity can play a bigger role. Obviously dating apps themselves aren't really going to lend themselves to the concept of anonymity — people need to provide some personal info so that they can actually meet people. It's important to make sure your social media profiles are locked down so that people can't find you from pictures or information from your dating profile alone, but the real danger comes when people move away from dating apps and on to social media or texting. There, it's easy to accidentally de-anonymise yourself.

Instead, it's ideal to keep the conversation somewhere that's still relatively safe (and anonymous) until you get a better idea of who the person on the other end of the line really is.

Really, stalking is its own (very severe) form of harassment, but it's worth noting how quickly and easily digital harassment can escalate.

Unfortunately social media stalking is a very real problem. Some dating apps—including Hinge and Tinder—let you connect your social media directly (or even display all your recent posts), and even those of us who abstain from linking our accounts directly will probably move on to social media or share our phone number at some point.

But social media provides a window into our personal lives — and that's probably not a window you want every stranger on a dating app looking through.

There are some extremely disturbing cases of social media access enabling perpetrators to commit real, physical harm. In 2018, a man invaded a 13-year-old's room after figuring out where she lived using Instagram posts. In 2019, a man assaulted a pop star after successfully tracking her down using the reflection in her eyes from a selfie she posted.

These instances of assault and harassment are not isolated — but part of a growing trend. The UK Home Office recorded a quadrupling of stalking offences between 2014 and 2018 — an alarming in cases which correlates with the pervasiveness and popularity of social media.

The bottom line is: social media is (obviously) not anonymous — but that means it's not really suitable for people you barely know.

Online safety gets talked about a lot, but often it's in opposition to things like encryption and anonymity. The reality is the exact opposite: safety comes from control, and encryption and anonymity put you in control. Finding online spaces where you feel safe means finding spaces where you feel like you're in control — and feeling safe and comfortable is a non-optional prerequisite for making a meaningful connection with anyone.

Apps like Session, which allow you to stay in control of who is messaging you, what they can see about you, and gives you an easy way to cut off communication if someone crosses a boundary — are important for making sure people are safe when they're dating online.

Turns out this article wasn't quite as whimsical and happy-go-lucky as it was supposed to be. Trust me — it's not you, it's me.