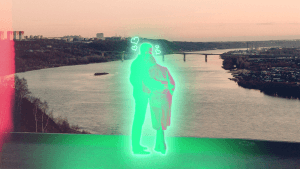 You know how this story goes. Love has truly been in the air at the Session offices, we've been talking about why privacy is important in our relationships 🥰 and why anonymity can help us stay safe when we're dating online 💋. Let's face it, not every message you send needs to be a super-serious professional communiqué — sometimes you just wanna say I love you to your special someone.

As much as we've had fun discussing the intersection of cybersecurity and romance, it's all been a bit...theoretical. Some of it is down right scary. So let's lighten the mood a little!

It's time for a story. A story of steamy romance that turned into everlasting love. And the best part? It's real! We recently put a call out for people who use Session to share some of their intimate stories with us — and this was our favourite one.

First thing's first — I recommend popping this video on for some background music while you read. Warning: contains YouTube and that lovin' feeling.

Our story begins long before Session was born, way back in 2015. Kee was in his first year at university. Water was discovered on Mars. Vine was at the peak of its popularity. Things were simpler back then.

It was the spring of '15, when our unlikely pair met in a local park. Sam was a privacy respecter and advocate, while Sally was a bit of a privacy skeptic (in case it wasn't obvious, we are keeping their real identities secret 🥷). Flowers were blooming, birds were singing, and (despite their differences) this fresh-faced pair hit it off. At first, they were just talking on Twitter.

"She did not feel comfortable talking on anything that was fully private," said Sam.

At the time, Sally wasn't exactly sure what the big deal about privacy was (well, Sam actually said she "had no idea," but we thought we'd be more generous). If anything, she thought the idea of 'privacy' was a bit creepy, and Sam obviouslydidn't want to be creepy, so on and on they continued on Twitter.

Throughout 2015 they continued chatting on and off "through very un-private means," as Sam puts it. Things were going well, very well even. Their relationship was steadily developing, and by Thanksgiving they were dating.

This year I'm thankful for...

Right before Thanksgiving, they were out on a date and—being very well read, worldly sorts—they started talking about world issues. In case it had slipped your mind, it was between 2013 and 2015 that Cambridge Analytica harvested the data of millions and millions of Facebook users. That story didn't break until December of '15, but there were already plenty of rumblings about Facebook mishandling and exploiting the data of the people on their platform.

Sam doesn't exactly recall what they were talking about — but it was about Facebook and privacy, so it's safe to say the vibe was 'screw Facebook, they're so creepy'.

"Why don't you care about privacy?" Sam asked, which netted him an all too familiar response.

"I have nothing to hide," Sally said, "why should I care about privacy?"

For anyone who has been in the privacy space for a long time, this is a tale as old as time. But Sam knew better, he dealt with data and data privacy in his work, and he knew all too well how seemingly innocuous data was shared and exploited all around the world.

On that fateful night, Sam shared more information about his work, his beliefs, and some of the stories he had come across over the years. He had been holding back because, well, some of these stories can sound a little far-fetched — and he didn't want to scare Sally off by sounding like a tin-foil hatter. I mean, you're telling me that there is a global network of surveillance where companies and governments share data and track your every movement? Uh, OK... But here's the thing — it's real. And Sally listened.

Slowly but surely, Sally started to dive deeper and deeper down the privacy rabbit-hole.

"She started getting into it and learning more about privacy and why it is very important,' Sam told us. While Sally was going on her own privacy journey, her relationship with Sam continued to progress — getting more and more serious.

Flash forward a couple of years, and Sam and Sally tied the knot — they're happily married, and these days they have ditched the non-private forms of communication for, you guessed it, Session.

"We use Session for all communication," Sam shared with us, adding that "she [Sally] is now more paranoid about privacy than me."

These days, Sally doesn't even have social media. She takes a lot of joy in maintaining her privacy online, and has fully embraced the extra freedom, security, and safety that comes along with added privacy. If Sally and Sam had never met, who knows — maybe she'd still be DMing everyone on Twitter. Maybe her love for privacy was fate from the very beginning.

Sam and Sally are not alone

We loved Sally and Sam's story in particular because it showed how important it is to not only protect our own privacy, but the privacy of the people around us as well. We've all had those times when we try to share some info about privacy with someone and get brushed off — and we know it can be disheartening.

But there's no doubt that the comfort that comes with privacy has helped Sam and Sally along the way — and that's something super special.

What does the next chapter of their story hold? Well, that's private. 😉